The History of the American Bulldog

There are a few stories surrounding the history of this amazing breed, but in our opinion, this is the one we believe to be of most truth, based off of factual evidence and information. 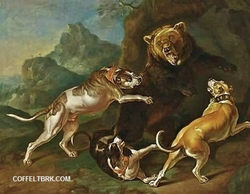 American Bulldogs are descended from ancient Mastiffs that originated in Asia and were brought to Europe by nomads. Mastiffs were bred to bring down, fight or hold large aggressive prey such as wild boar, bears or big cats. Animals that are as likely to fight as run away. Ancient Mastiff had incredible fighting ability and courage.
Phoenician traders brought a brown strain of Mastiff to England around 800 B.C. Celts bred these brindle or brownish red behemoths to catch cattle and wild boar. Today’s English Mastiff and Bullmastiff have a similar colour and to some degree are descended from this strain.


Around 400 A.D. a second very tough strain of Mastiff reached English shores. This dog was called the Alaunt. English butchers and farmers turned the Alaunt into the world’s first true Bulldog. In medieval times, the working English Bulldog was the first dog to develop the so called ‘lock jaw grip’ which really has more to do with a dog’s gameness than any structural difference in its jaw. A true Bulldog has the ability to chase, catch and hang onto the nose, cheek or throat of a large herbivore and not let go no matter how hard the beast struggles or how much punishment the dog is forced to absorb. Throughout medieval, Elizabethan and the early industrial periods, Bulldogs routinely caught horse, cattle and boars. Sometimes in routine farm or butchery work and sometimes in staged competitions. When catching domestic animals, the Bulldog was usually able to make the hoofed creature submit to the excruciating pain of the bite before being harmed himself. When it is ready to cry “uncle” a bull will lower its head to the ground and allow the Bulldog to drag him backwards to the butcher. The bovine can then be slaughtered or put into a holding pen. 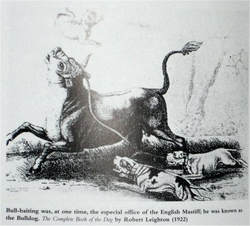 An old time working Bulldog also had the ability to throw a bull to the ground by rapidly corkscrewing his body right when the big beast was off balance in the middle of a stride. It was possible for an experienced 80 pound Bulldog to topple an 1800 pound bull. Though his main opponent was usually a bull, the English Bulldog was also used against bears, lions and other ferocious carnivores. These staged fights were called baits. The Bulldogs employed on bears and large meat eaters were heavier than the ones used solely on livestock. For the larger opponents speed was not as important and the fight would take place in an enclosed area so endurance was less of a factor. Whether large or small the working English Bulldog that survived this grueling gauntlet of animal combat became the greatest canine warrior ever. In 1835, all animal baiting contests were made illegal in England. The only baiting that survived the ban was dog baiting or dog fighting. Coal miners in the Staffordshire region crossed English Bulldogs with scrappy terriers and continued the gladiatorial tradition in clandestine matches that are still going on today. From these Bulldog terrier crosses we get the American Pit Bull Terrier, the Staffordshire Bull terriers and the Bull Terrier. 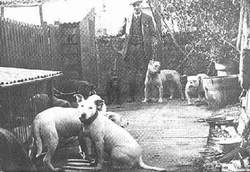 Because of the anti-baiting laws, purebred Bulldogs were very rare in England by the middle of the 19th century. They were being exported to America where they joined and improved the working Bulldogs already in the former colonies. They were also shipped to Germany where they helped create the Boxer. They were crossed with Mastiffs to create superior guard dogs. Interestingly, the early Bullmastiffs were often white or piebald, only latter with the addition of dark brindle mastiff blood did darker colors evolve. And finally the last of the working Bulldogs were crossed with pugs to create a blocky mild mannered little show dog. Today, the dog the world calls the English Bulldog is really a Pug Bulldog cross, a fine animal in its own right but not a true working Bulldog. In fact, the working English Bulldog became extinct in his native land at the turn of the 19th century. Fortunately he survived in America, especially in the mountainous regions of the rural south. There he was saved from extinction because he still had work to do. Hogs and cattle were allowed to free range in this rugged terrain where fences were impossible and could only be caught with hardy English Bulldogs. Throughout the south and the southwest, Bulldogs were also used as guard dogs. In the 19th century and earlier there are numerous historical records of large plantation Bulldogs or estate Bulldogs that were kept in yards sometimes on chains and used on human bad guys. Plantation bullies were occasionally allowed to roam in prison yards, patrolling open spaces between cells and main wall. Regional varieties developed and many names were applied to the southern Bulldogs. Some of the more common names were Old English White, White English, Swamp Bulldog, Backwoods Bulldog, English Pit, Old Country White and many others.

Toward the end of the 1960s, the last remnants of working English Bulldogs were disappearing from the rural south. Large agribusiness firms were consolidating land and eliminating small scale ranching. Also, small all terrain vehicles were allowing farmers to herd, catch and move cattle without dog assistance. It looked like the working English Bulldog was truly going to become extinct once and for all. Fortunately at this time a few dedicated Bulldog enthusiasts made a concerted effort to locate some of the last of the hill Bulldogs and begin efforts to breed them, preserve them and foster a public awareness so their breeding programs could continue into perpetuity. Because of their work, the Bulldog, the breed that had toughed it out for so long against so many adversaries, could survive. The principal architects of today’s American Bulldog are Allen Scott and John D. Johnson. From the breeding programs of these two men, two distinct strains have emerged, commonly called the Classic type and the Standard type. The former is a larger, wider dog with more bone, pendulous lips, an undershot jaw, facial wrinkles and a shorter muzzle. The Classic type resembles an athletic, tightly built, white Bullmastiff. The Standard type looks like a large, coarse, leggy, white Pit Bull. To say that today’s American Bulldog is a direct descendant of the original working English Bulldog is not to say that a small percentage of other breeds have not been recently added, mostly in the 1970s when the AB was being rebuilt. The Mastiff/Bull breeds used in such outcrosses were descended in part from the working English Bulldog, Alaunt and other ancient molossers. Due to the low number of Old English Whites left, some breed out-crossing was inevitable to insure enough genetic diversity.
There seems to be a lot of confusion about the different types of American Bulldogs. We hope this will clear up some of that confusion and give people a better understanding.

​The American Bulldog is a breed of its own. Within the breed, there are 3 different types. This is why there is such a variation within the breed. You will notice that some are tall, longer muzzles, more athletic, some that are big, solid, shorter muzzles, and then there is everything in-between.

​The Classic type is usually called the 'Johnson' Type, however this is also not correct. As with Scott, Johnson is a bloodline, not a type of American Bulldog.
​John D. Johnson was a breeder of the Classic Type - His bloodline
Powered by