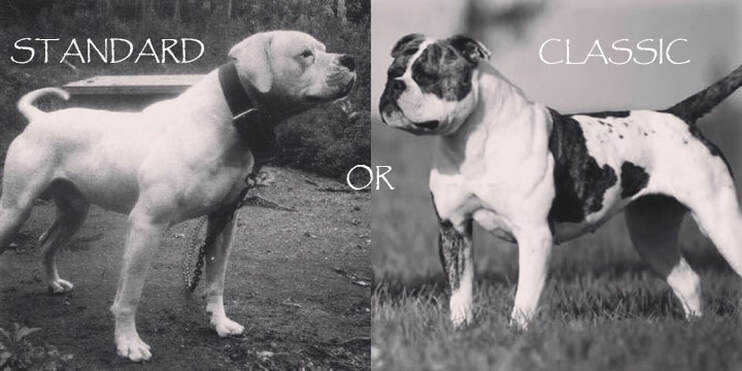 ​The American Bulldog is a breed of its own. Within the breed, there are 3 different types. This is why there is such a variation within the breed. You will notice that some are tall, longer muzzles, more athletic, some that are big, solid, shorter muzzles, and then there is everything in-between.

Often I see people calling their dog a 'Johnson Breed' or a 'Scott Breed'.

Let me say first off - There is only one breed, and that is an American Bulldog!

Johnson & Scott are Bloodlines, not separate breeds or types.

There are three main types within the American Bulldog Breed.

* Hybrid Type American Bulldog, which is a mix between the two types - Standard & Classic.
A Hybrid type will usually pull more towards either a standard phenotype or a classic phenotype, while its genotype reflects both classic and standard dogs.

Scott and Johnson are bloodlines, not types

People often mistake a bloodline for a type.
for instance, most people say 'Scott Type' or 'Johnson Type', when the correct term is actually Standard Type & Classic Type.

The Scott bloodline was produced by Alan Scott - his dogs are Standard Type American Bulldogs.

The Johnson bloodline was produced by John D Johnson - His dogs are Classic Type American Bulldogs.

Unless you have pedigree papers that proves your dogs linage, and can show the Scott or Johnson bloodline in the first generation of the pedigree, on both sides of the pedigree,
You Do Not Have A Scott or Johnson American Bulldog.
​
Above is a list of a few bloodlines influental to the Standard type American Bulldog.
A few others to mention would be Stover, Williamson, Tate and Osgood.

Below you will find a few links to different America Bulldog Registries Breed Standard.
You will notice that the TYPES are either Standard/Performance or Classic/Bully.

When these registries hold conformation shows, there are usually two show rings.
One for the Standard Type, and one for the Classic Type.